KRZYSZTOF ZANUSSI: SIFF is definitely the most successful

cultural forum for the filmmakers in this region

One of the best SIFF friends, the highly celebrated Polish director Krzysztof Zanussi, sent a special personal message for the festival, Sofia and Bulgaria.

On Friday, Day 16 of the imaginary diary of the 24th Sofia Film Festival, we present to you the special video message by the legend of Polish cinema, presented with Sofia Award for his contribution to the art of cinema, the director Krzysztof Zanussi.

From this day's program we present another film from the “New Bulgarian Features” section – “Wildlings” by Martin Makariev. The film is an independent production without state support and it was the most watched Bulgarian film of 2019. It is presented on video by the actor and producer Aleksander Sano.

For a third time we will present also short films from previous editions of the SIFF. On today’s day 16 we have selected two films by Drago Sholev – “Before Life, After Death”, Jameson Award winner in 2005 and  then selected at the “Semaine de la Critique” in Cannes, and also the film “I Have Something to Tell You”.

Among the other films of the day are Federico Fellini’s masteripiece “La Dolce Vita”, celebrating 100 years from Fellini's birth, Aki Kaurismaki’s debut “Crime and Punishement”, “Open Door” by Florenc Papas of the Balkan competition, “Send Me to the Clouds” by Congcong Teng of the International competition and “The Godfathers of Hardcore” by Ian McFarland.

The time machine will take us back to Fridays of some past editions of SIFF with pictures from the premiere of “Eastern Plays” by Kamen Kalev, “Everlasting Moments” by the great Swedish director Jan Troell and him receiving the Sofia Award, the presentation of the director’s cut of “The Tin Drum” by Volker Schlöndorff, presentations of the films “In the House”, directed by Francois Ozon, presented by the actor Ernst Umhauer and “Falling Star” by Lluís Miñarro, member of the Jury of the 24th Sofia Film Festival. We will see the renowned Agnieszka Holland at her first visit to SIFF in 2017, in the company of Krzysztof Zanussi, as well as Paweł Pawlikowski with TICKЕT in CAN at SIFF, before the presentation of “Cold War”. We will remember the premiere of “A Picture with Yuki” by Lachezar Avramov, Audience Award winner at SIFF in 2019. We're showing also a special photo of the 16th SIFF International Jury in 2012 - David Mackenzie (president), Marc Baschet, Drago Sholev, Vanya Shtereva and Jan Cvitkovic.

Today’s special guest at the 16th edition of the diary is the Italian director Alice Rohrwacher, who presented her film “The Wonders” on this Friday 2015, in memoriam of the SIFF and Kita's dear friend Karl 'Baumi' Baumgartner.

Our musical greeting for the day is by the actor, director and musician Ivan Yurukov, presenting the song “Dark Land”, lyrics by Dimitar Voev and performed by Ivan Yurukov, Stoyan Mladenov, Nikolay Dimitrov and Milen Apostolov.

On day 16, Friday, there are 14 films scheduled for screening at the 24th SIFF.

HERE YOU CAN FIND INFORMATION about "WILDLINGS" on the Sofia Film Festival website.

SIFF SHORTS: BEFORE LIFE, AFTER DEATH

& I HAVE SOMETHING TO TELL YOU

In 2005 the director Drago Sholev won the third Jamieson Award competition with his short film "Before Life, After Death". Right after winning in Sofia, the film took part in Critics' Week at Cannes. Drago has participated with all his short and feature films in the programs of Sofia Film Festival over the years. Today we have the pleasure to present you the short films "Before Life, After Death" and "I Have Something to Tell You".

Трябва да ти кажа нещо/I have something to tell you from Drago Sholev on Vimeo.

HERE YOU CAN FIND INFORMATION about "LA DOLCE VITA" on the Sofia Film Festival website.

FILM OF THE DAY: CRIME AND PUNISHMENT

HERE YOU CAN FIND INFORMATION about "CRIME AND PUNISHMENT" on the Sofia Film Festival website.

FILM OF THE DAY: OPEN DOOR

HERE YOU CAN FIND INFORMATION about "OPEN DOOR" on the Sofia Film Festival website.

FILM OF THE DAY: SEND ME TO THE CLOUDS

HERE YOU CAN FIND INFORMATION about "SEND ME TO THE CLOUDS" on the Sofia Film Festival website.

FILM OF THE DAY: THE GODFATHERS OF HARDCORE

HERE YOU CAN FIND INFORMATION about "THE GODFATHERS OF HARDCORE" on the Sofia Film Festival website. 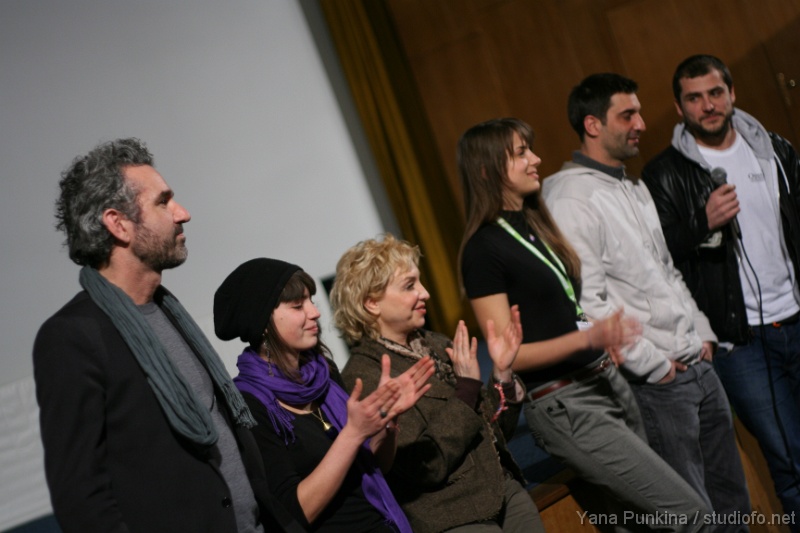 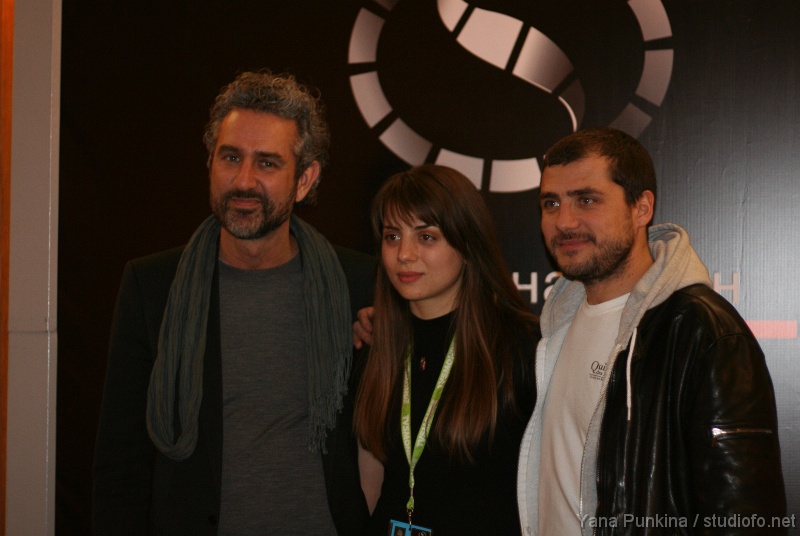 On 15th of March 2010, Friday, the premiere of "Eastern Plays", Kamen Kalev's debut film, took place at the Cinema House. Presented in the Sofia Meetings 2008's programme, the world premiere of the film was at the Directors' Fortnight at Cannes in 2009, after which it triumphed around the world. The international jury of the 14th SIFF awarded him a Special Mention award and the film won the prize for best Bulgarian feature film. 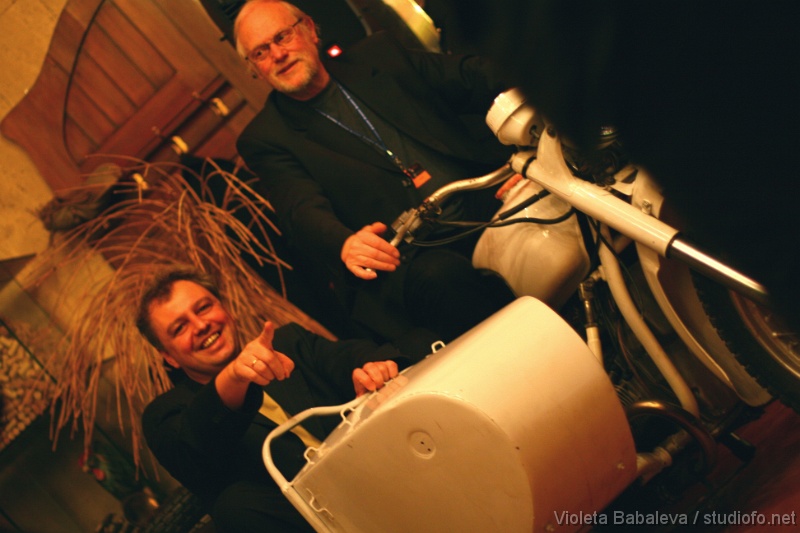 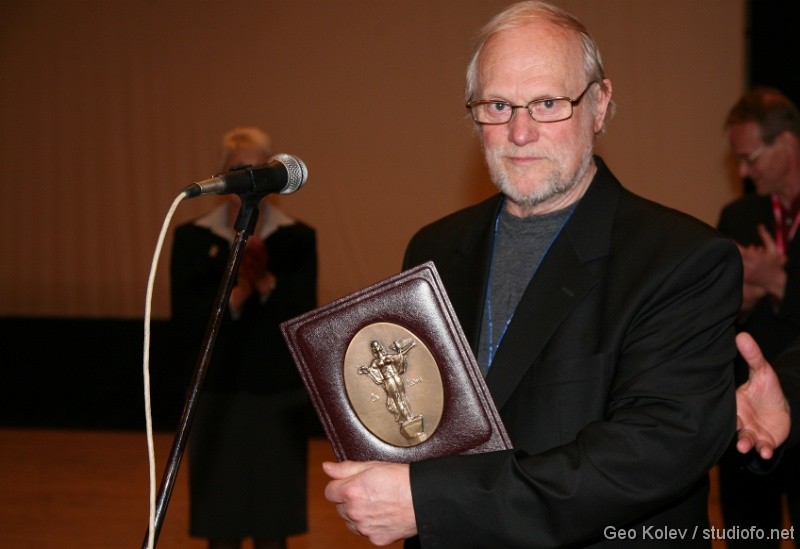 On 15th of March 2010, Friday, Swedish director Jan Troell received the Sofia Award for his contribution to the art of cinema and presented his film “Everlasting Moments”. 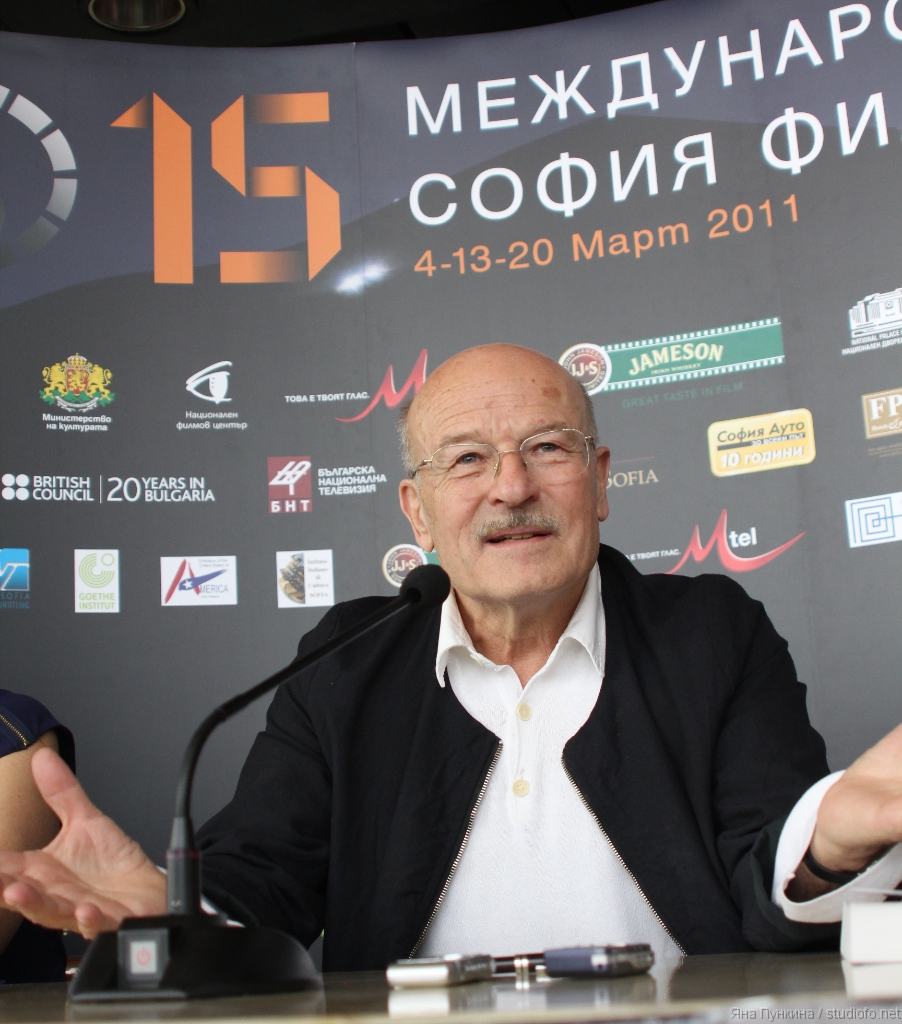 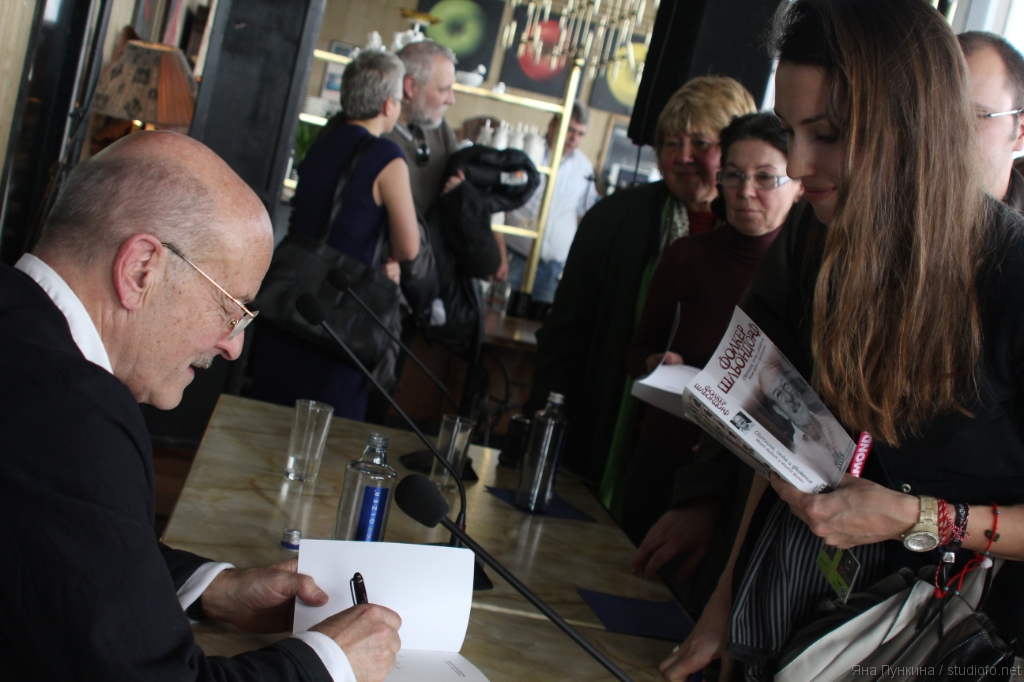 On 11 of March 2011, Friday, the director's cut of "The Tin Drum" was presented in the SIFF program and fans of the legendary German director Volker Schlöndorff had the opportunity to meet him in a special "Interview with Autograph". The director gave autographs on his book "Light, Shadow and Movement", published by "Colibri". 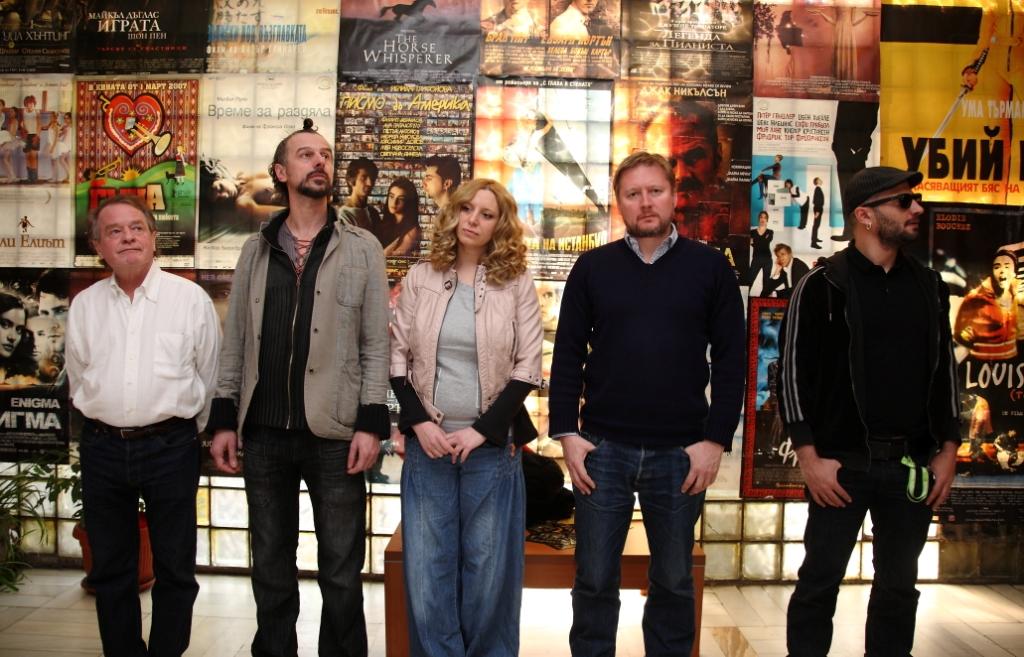 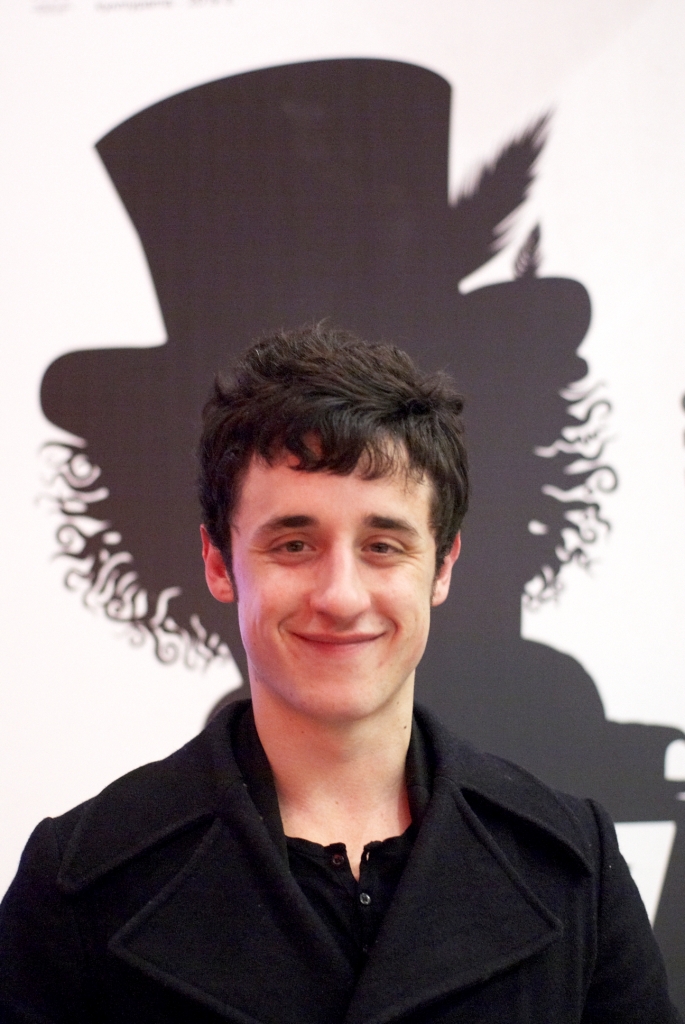 On 15th of March 2013, Friday, the young actor Ernst Umhauer presented to the festival audience in Hall 1 of the National Palace of Culture the film "In the House" by the master director François Ozon. 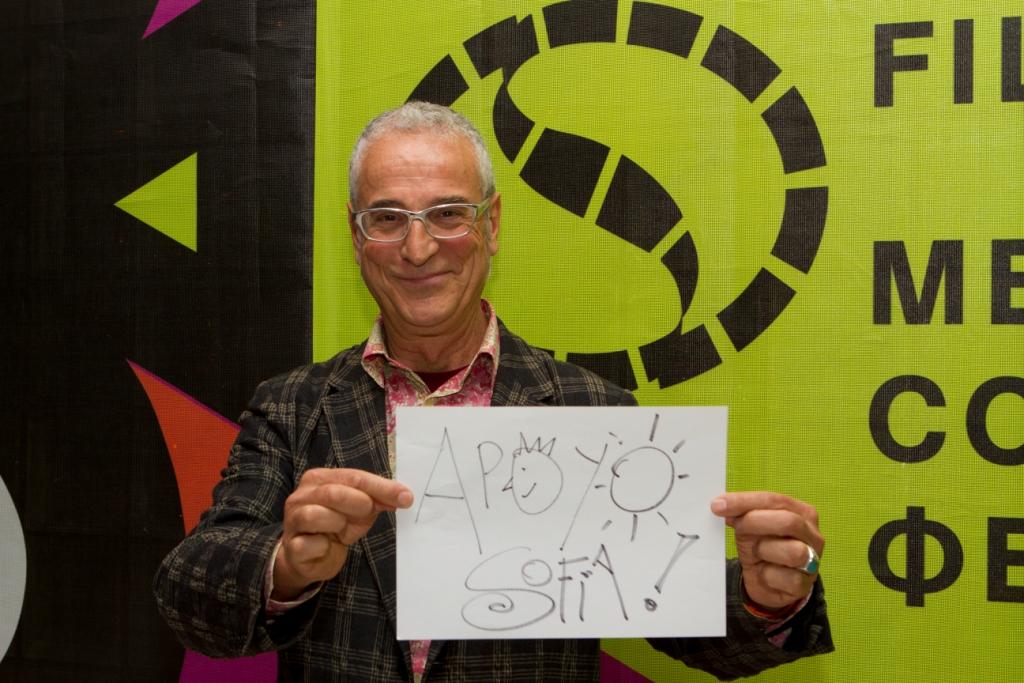 On 14th of March 2014, Friday, Spanish director Lluís Miñarro, who is a member of the International jury of the 24th SIFF, presented his film "Falling Star" at the Cinema House. 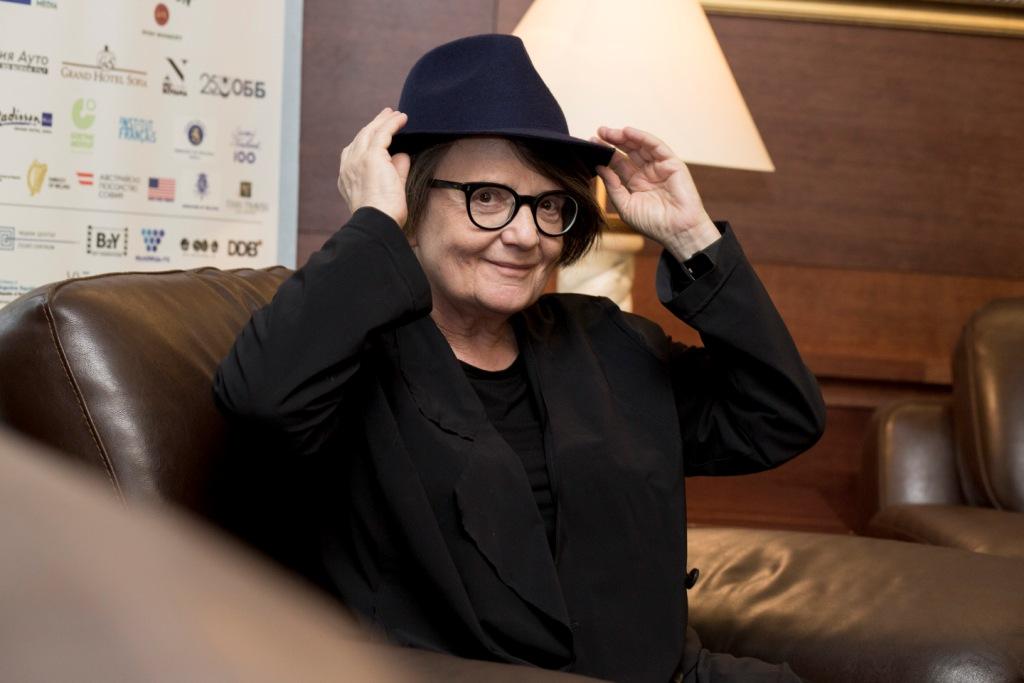 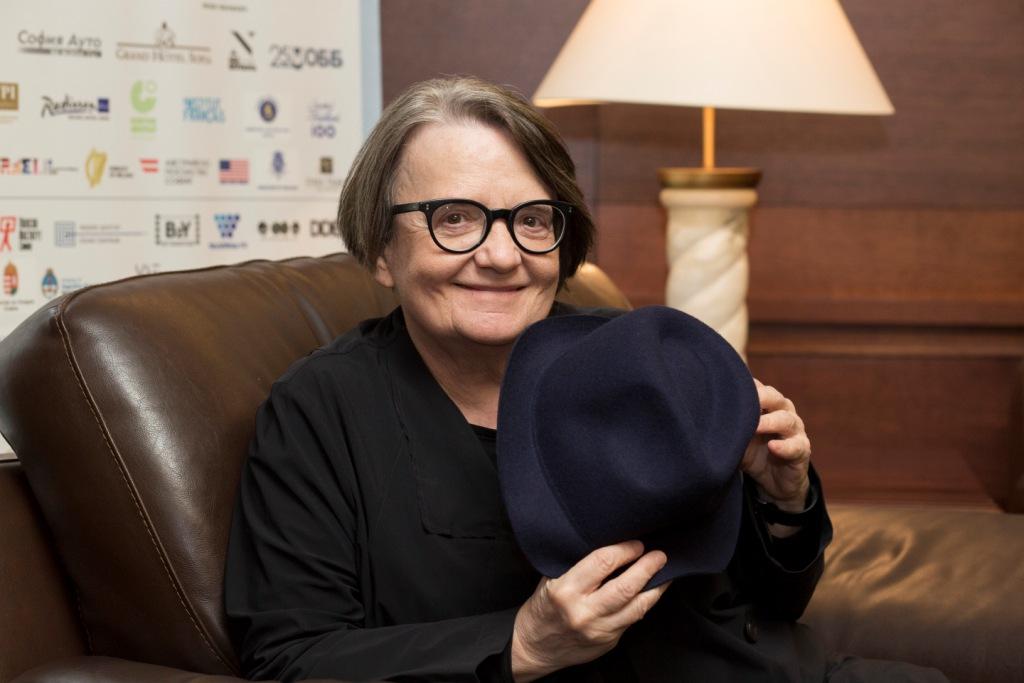 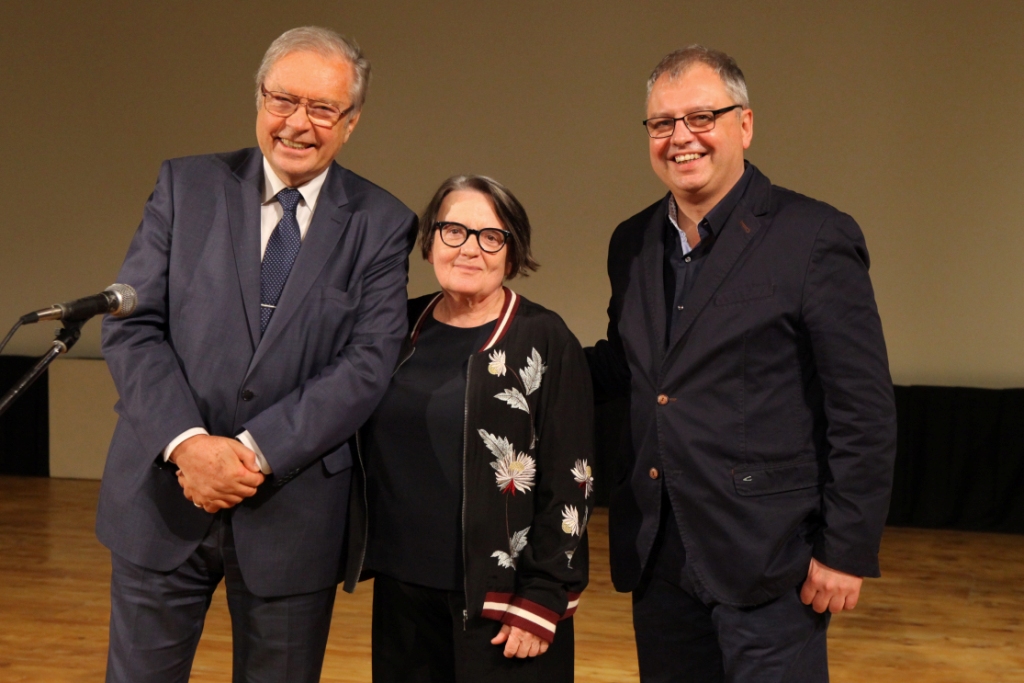 On 17th of March 2017, Friday, two legendary Polish directors were together in front of the Bulgarian festival audience - Agnieszka Holland and Krzysztof Zanussi to present Holland's film "Spoor". 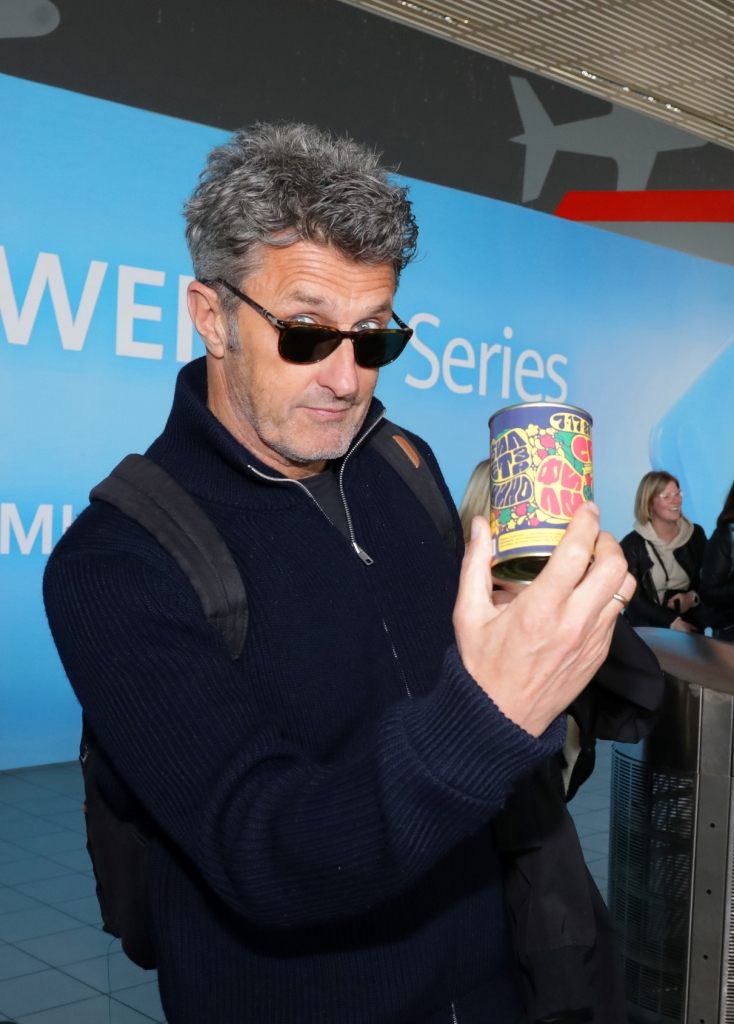 On 15th of March 2019, Friday, we welcomed the Polish director Paweł Pawlikowski with our special TICKET in CAN. 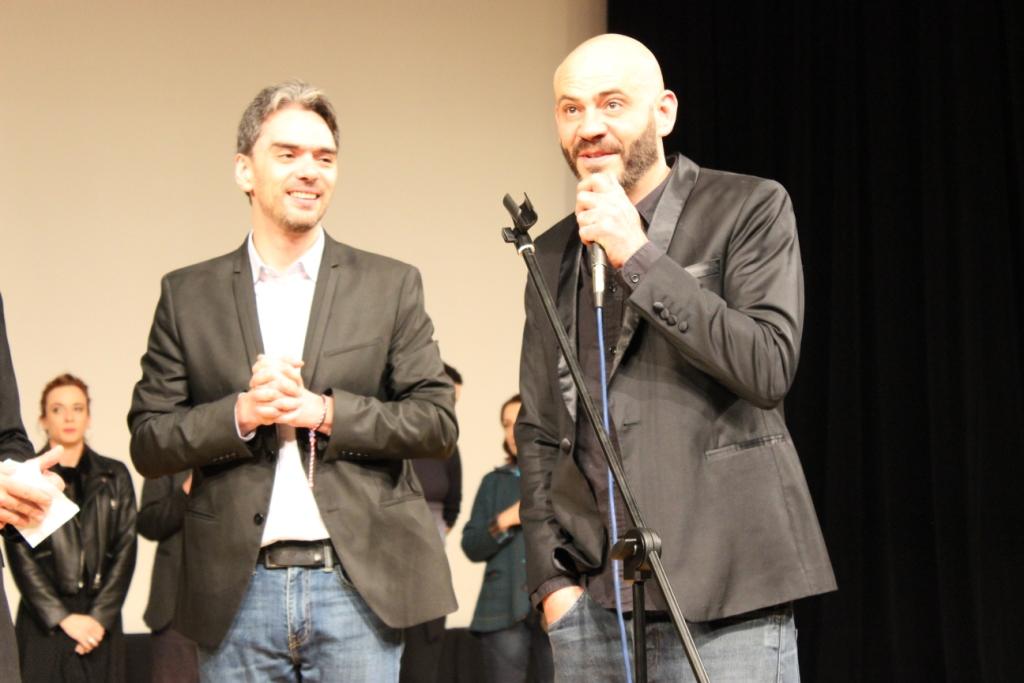 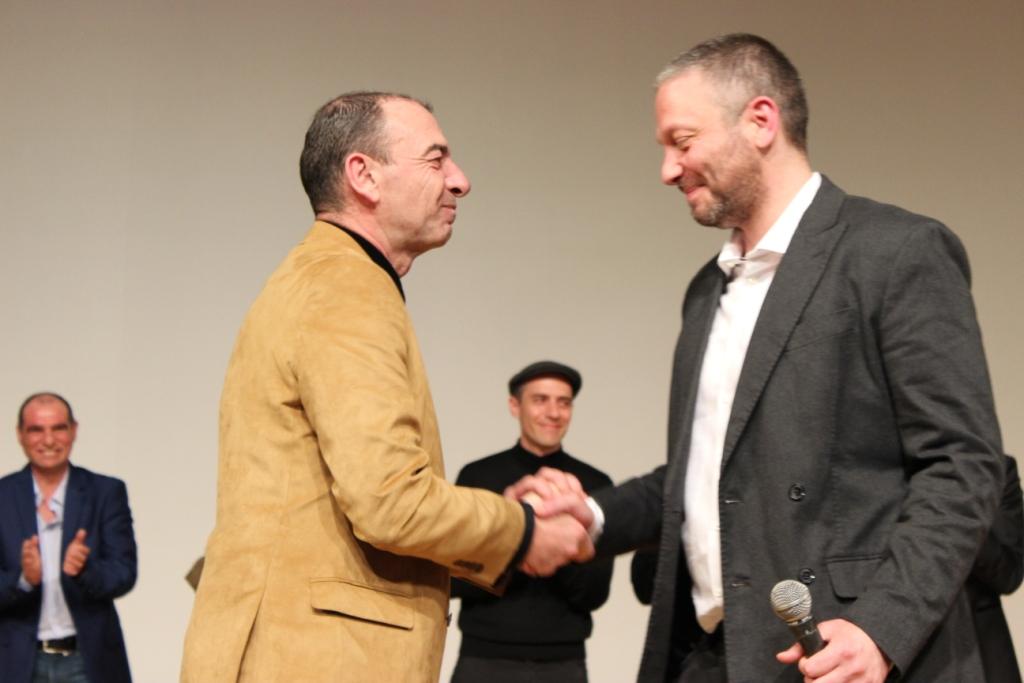 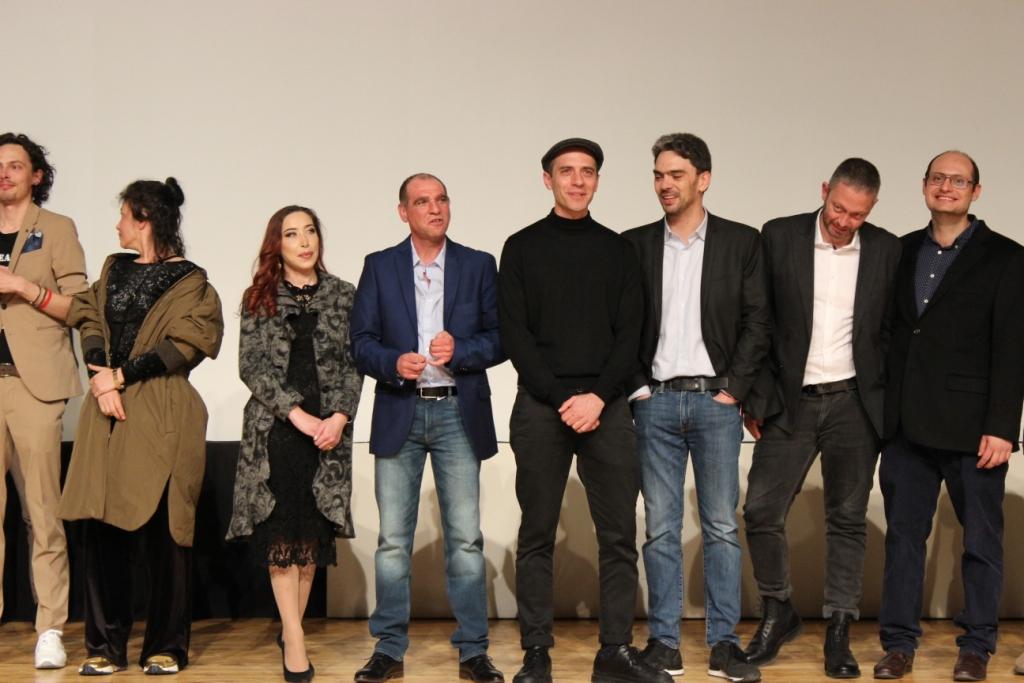 On 15th of March 2019, Friday, was the premiere of the Bulgarian feature film "A Picture with Yuki", directed by Lachezar Avramov, written by Dimiter Stoyanovich and Avramov, starring Ruscen Vidinliev, Serafim Todorov and Dimiter D. Marinov, produced by the Chouchkov Brothers. The film was presented with the Audience Award at the 23rd SIFF.

On 13th of March 2015, Friday, Alice Rohrwacher presented her film "The Wonders" in front of the festival audience in Sofia at a special screening dedicated to the memory of our great friend, producer Karl 'Baumi' Baumgartner, who passed away two months before the premiere. His daughter Martina Baumgartner received the Sofia Award for her legendary father's contribution to the art of cinema.

We also present an interview with Alice Rohrwacher. 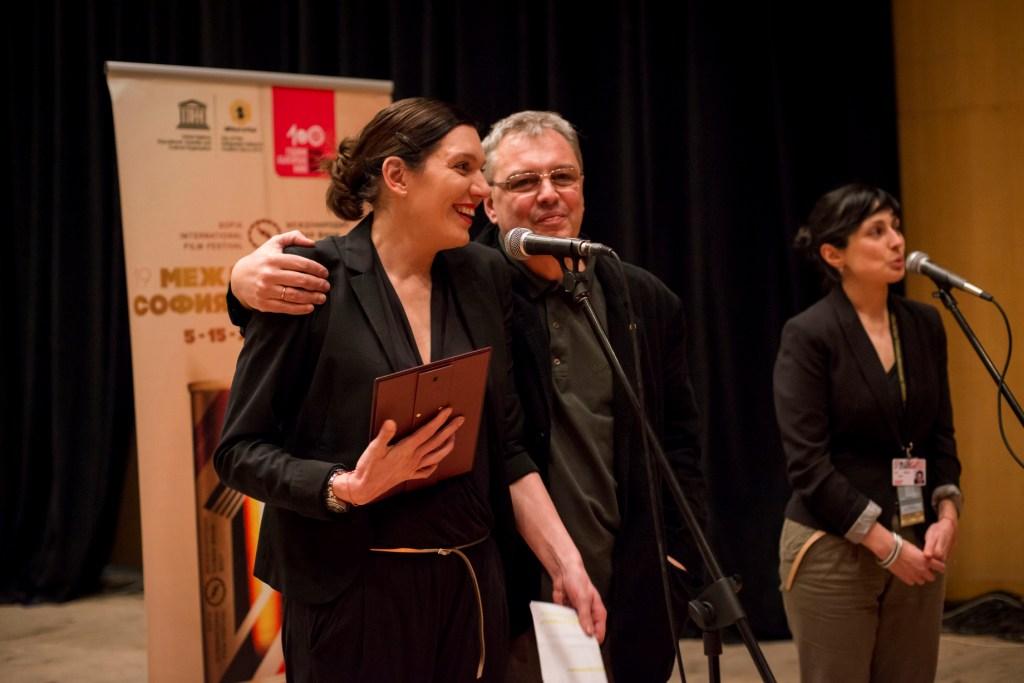 Martina Baumgartner with the Sofia Award in memory of her father - the great producer Karl 'Baumi' Baumgartner. 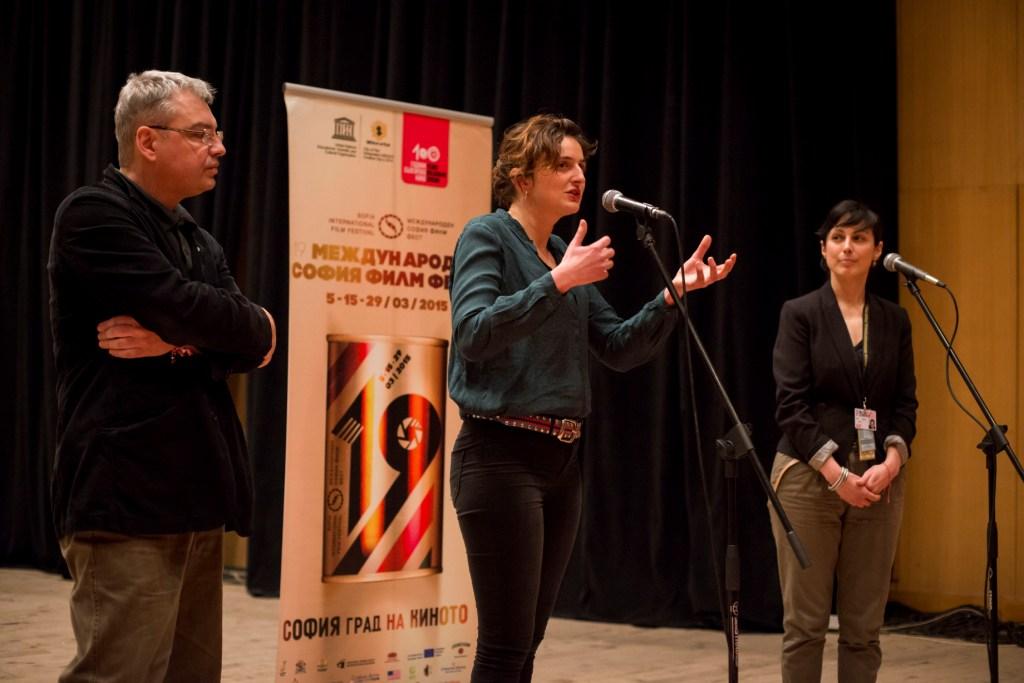 Alice Rohrwacher in front of the festival audience at Lumiere Lidl Cinema.

"Dark Land" is a recording during the musical performance "Part of a Collection", based on texts by Dimitar Voev from the book "Greet the Gods from Me".