Day 8 of the 24th Sofia Film Festival was planned for Thursday, the 19th of March 2020. It will happen on another Thursday later this year.

In today’s online diary of the festival we present to you Stefan Laudyn, director of the Warsaw International Film Festival, member of the International Jury for Bulgarian feature films. His colleagues will be Gaia Furrer, artistic director of the "Venice Days" section (Giornate degli autori) at the oldest film festival in the world - in Venice, and Ahmed Shawky, artistic director of the Cairo International Film Festival. Stefan is one of my closest friends. We’re both part of The Festival Band, that we will present soon to you. Some time ago he suggested to the Bulgarian rock band “Delta Roosters” to record my friend Peter Georgiev – Pesheto’s song “Rhythm” together with the Chinese film director and singer Zuxin Hou. This was supposed to happen in Sofia in March, but it was postponed, together with the festival. In this edition we present to you Zuxin Hou and her film about her father, one of the first rock musicians in China – “My Dad Is a Rocker”.

On Thursday we scheduled the premiere of one of the most successful Bulgarian films of 2019 – “Sister” by Svetla Tsotsorkova, a film that started with a prize at the San Sebastian Film Festival and later triumphed in Cottbus, Skopje and many other festivals around the globe. Special video messages come from Svetla, co-writer and produces Svetoslav Ovtcharov and the actors Assen Blatechky and Elena Zamyarkova.

On that day is also the world premiere of the new documentary by Adela Peeva “Silence with Dignity” about Irina Aktasheva and Hristo Piskov, auteurs of one of the most important films in the history of Bulgarian cinema – “Monday Morning” (1966), banned bu the communist censorship, which also reflected in the personal and professional life of it’s creators. Adela Peeva, holder of the Sofia Award, has a special message for the audience.

We will also present the film from the Balkan Competition “The Flying Circus” by Kosovar director-scriptwriter Fatos Berisha.

On this 8th day of the festival, Thursday, there are 20 films scheduled for screening. We will see them in the cinemas of the Sofia Film Festival on a Thursday, later this year.

Today we present STEFAN LAUDYN, the director of the Warsaw International Film Festival, as a member of the International jury for Bulgarian feature films.
Born in 1959 in Warsaw, Laudyn joins the team of the Warsaw International Film Festival in the mid-80s. In 1990 he was first head of theatrical distribution of Warner Bros. films in Poland. In 1995 he founded the Warsaw Film Foundation, of which he is general manager; in 2000 he founded the Warsaw Screenings, an event promoting Polish cinema abroad; he is coordinator of the Alliance of Central and Eastern European Film Festivals, which he founded in 2001; since 2005 he has been organizer of CentEast Market Warsaw; he is co-founder of the China – Europe Film Promotion Project. Stefan Laudyn is a member of the European Film Academy; he is also a member of the Polish Film Academy, and was member of the Warsaw Council of Culture. He has contributed to the international promotion of numerous Polish films, presented at the world’s most prestigious festivals. He has been awarded the Gloria Victis medal for merits in culture.

FILM FROM THE INTERNATIONAL COMPETITION: SISTER

HERE YOU CAN FIND INFORMATION about "SISTER" on the Sofia Film Festival website.

BULGARIAN PREMIERE OF THE DAY: SILENCE WITH DIGNITY

HERE YOU CAN FIND INFORMATION about "SILENCE WITH DIGNITY" on the Sofia Film Festival website.

FILM FROM THE BALKAN COMPETITION: THE FLYING CIRCUS

HERE YOU CAN FIND INFORMATION about "THE FLYING CIRCUS" on the Sofia Film Festival website.

The 6th Sofia Film Festival in 2002 opened with the film “No Man’s Land” by Danis Tanovic. The festival has a story with this film, that you can read about in Stefan Kitanov’s interview for the „Iconomist“ magazine. On March 17, 2012 Bosnian director Danis Tanovic received the Sofia Award, presented to him by the mayor of Sofia - Yordanka Fandakova, patron of the festival.

14 years after the Foreign language Oscar for “No Man’s Land”, the friends of SIFF director Danis Tanovic and his producers Cédomir Kolar and Marc Baschet presented on March 12, Thursday, their film „Tigers“. 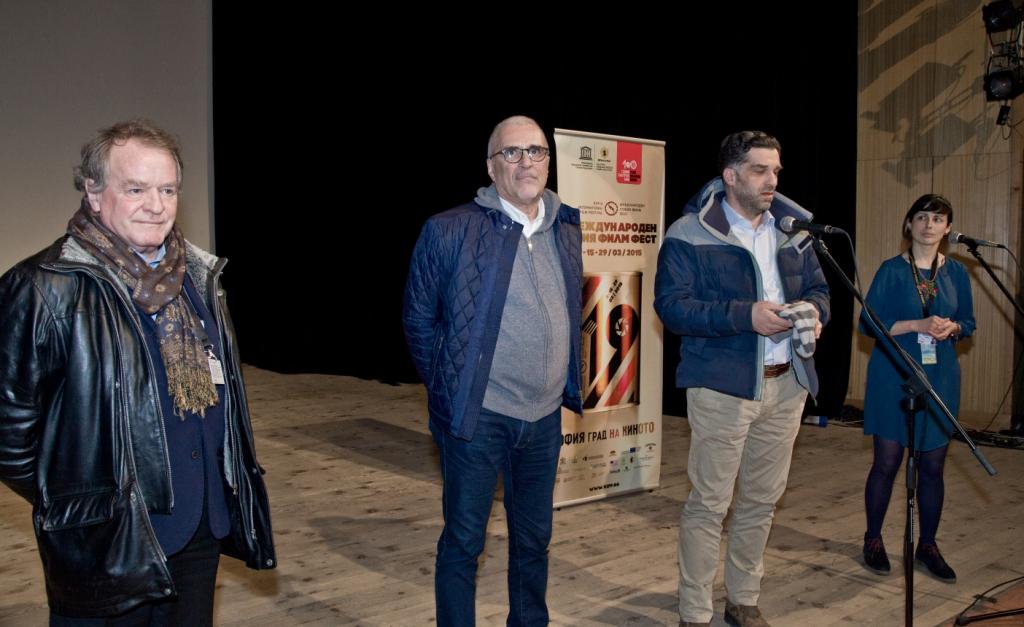 Marc Baschet, Cédomir Kolar and Danis Tanovic in front of the festival audience at Lumiere Cinema.

American director Sean Baker visited the 22nd Sofia Film Festival with his film “Тhe Florida Project” and presented it personally to the festival audience on Thursday, 15th of March 2018. Here we share with you also his meeting and talk with the audience in the frame of “Sofia – City of Film: Interview with an Autograph with Sean Baker”.

SHORT FILM OF THE DAY: MY DAD IS A ROCKER

The film “My Dad Is a Rocker” by Zuxin Hou won the Best Documentary Short Film Award at the Warsaw International Film Festival in 2014. We will see it in Sofia in 2021. Maybe together with her feature debut, that she’s filming this year in Italy and China. We wish her to finish it. And in 2021 to sing live the song “Rhythm” by Pesheto and the “Delta Roosters” on the big party of the 25th SIFF together with the Festival Band.

This is the studio record of the song “Rhythm” by Pesheto and “Delta Roosters”. We’re expecting their song to have a Chinese version performed by the band and Zuxin Hou.