Day 10 is usually the busiest. This is the second day of Sofia Meetings, when numerous meetings between over 250 film professionals from all over Europe take place, works in progress are screened, there are panels, workshops, discussions. On this day, Saturday, most of the films in the main cinemas are presented by their auteurs. Usually the Award Ceremony takes place in the evening, although this year it is by exception on Friday. And in the end, late in the evening, is the Big Party for the closing of Sofia Meetings and the main dates of the festival with a 2-3 hour rock concert by The Festival Band. This was supposed to happen in City Stage on the 21st of March 2020. It will happen – on another Saturday in 2020.

And since we’re mentioning dates and period again, I will make a note, that we moved the opening date of the 24th Sofia Film Festival for the 24th of September 2020. Let’s hope we can open on that date and watch world cinema with it’s auteurs in cinema halls and without fear. Because that is the point of film festivals. People meeting and sharing their emotions on Art #7 – CINEMA!

But let’s get back to Day 10 of the 24th SIFF. Among the films of the day is “Charlatan” by Agnieszka Holland. It is presented by it’s co-producer Mike Downey, chairman of the Board of the European Film Academy, a position that Agnieszka Holland herself held for 6 years. She will receive the special FIPRESCI 95 Platinum Award for her glorious and uncompromising contribution to cinema. So far in Sofia this award was presented to Béla Tarr, Ildikó Enyedi, Goran Paskaljević, Bille August. We present by videos the films “Inna de Yard”, directed by Peter Webber and “The Whistlers”, produced by Jim Stark. We also present the film by another member of the jury – Lluís Miñarro - “Love Me Not”, where one of the main parts is performed by our friend, the actress Lola Dueñas.

We will also remember in pictures the visits of Hugh Hudson, Ben Cross, Aleksandr Mindadze, Stas Namin, Fridrik Thor Fridriksson, Abel Ferrara, Kiril Marichkov, Agnieszka Holland. And we can also watch part one of the conversation with 1/6th of the Monty Python, the incredible Terry Gilliam. They have all been to the Sofia Film Festival on Day 10, Saturday.

What makes the SIFF different from other festivals in the world is that it has it’s own rock band to greet the guests on this particular Day 10. "The Incredible Story of the Sofia Film Festival Band" is told a bit further down in this more of a musical rather than film edition of our online diary. You will see and hear little-know things that remain in the history of the SIFF and Cinema House at the beginning of the 90s. The core of the Festival Band are Kita (Stefan Kitanov) and Pesheto (Petar Georgiev). Between 1990 and 1992 we played on the streets and underpasses of Sofia. Later, when I rose in society as a Director of Cinema House in the begining of May 1992, we began performing in the first rock club in Sofia – Red Lion at St.Sofia Street. The Festival Band had different line-ups through the years. You will find out about some of the band members in the text.

In the world of cinema The Festival Band is famous as the three Stefan’s band, festival directors - Kitanov (Sofia), Laudyn (Warsaw) and Uhrík (Prague). Even Variety reported on one of our gigs with an article, the band is mentioned also in the famous article in Variety from 2007. With Laudyn and Uhrík we play together since 2004. We will be together on Day 10 of the SIFF too, also with the Delta Roosters and many friends, participants with films at the SIFF and Bulgarian musicians. Special video messages, including lots of music, from Kita, Pesheto, Stefan Laudin, Stefan Uhrik, Angel Kasparyanov, Dimitar Vasilev – Nufri, Anton Sekerdjiev.

On the 10th Day of the 24th SIFF there are 21 film scheduled for a screening. We will see them!

On the 10th Day of the Festival, Saturday, the FIPRESCI 95 Platinum award goes to the notorious Polish Director Agnieszka Holland, followed by a screening of her latest feature film “Charlatan”.

HERE YOU CAN FIND INFORMATION about "CHARLATAN" on the Sofia Film Festival website.

HERE YOU CAN FIND INFORMATION about "INNA DE YARD" on the Sofia Film Festival website.

FILM OF THE DAY: THE WHISTLERS

HERE YOU CAN FIND INFORMATION about "THE WHISTLERS" on the Sofia Film Festival website.

FILM OF THE DAY: LOVE ME NOT

HERE YOU CAN FIND INFORMATION about "LOVE ME NOT" on the Sofia Film Festival website. 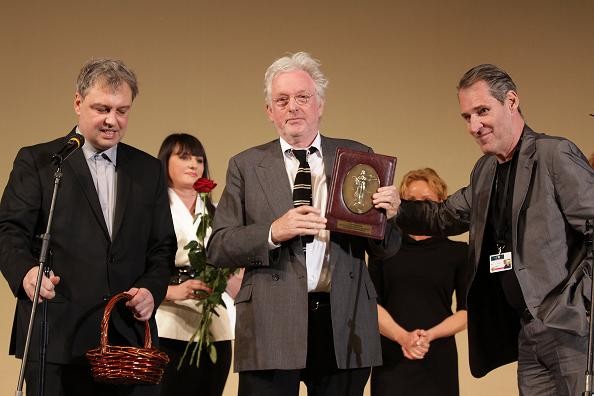 On 17th of March 2012, Saturday, Hugh Hudson received Sofia Award and together with the actor Ben Cross presented their legendary film "Chariots of Fire". 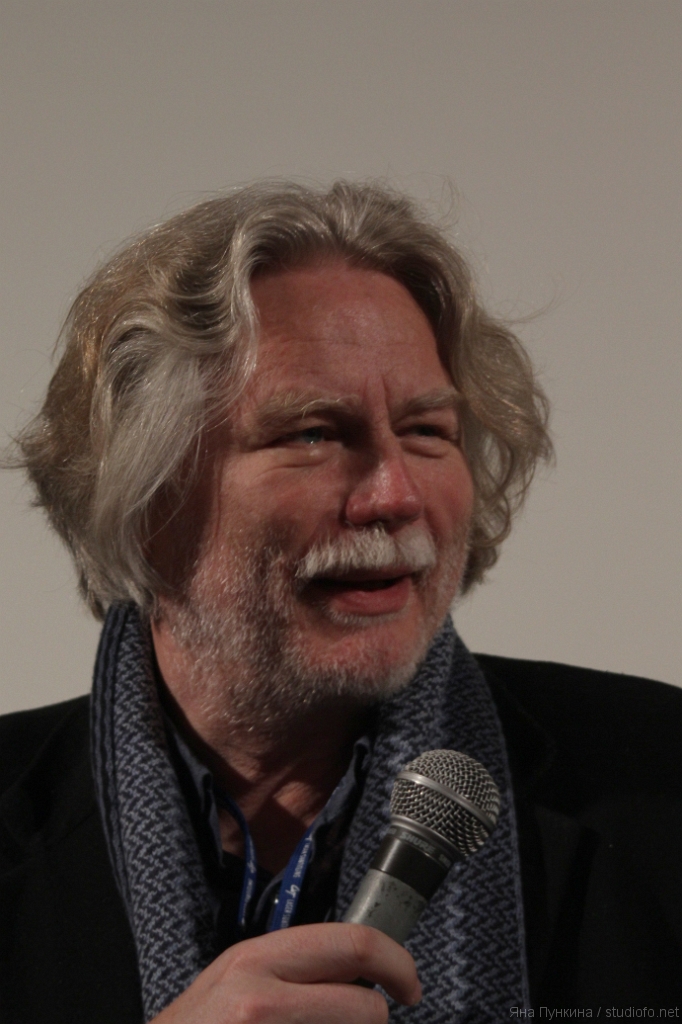 On 12th of March 2011, Saturday, the director and producer from Iceland Fridrik Thor Fridriksson, the president of the International Jury of the 15th SIFF, presented his film "Mama Gogo" in front of the festival audience.. 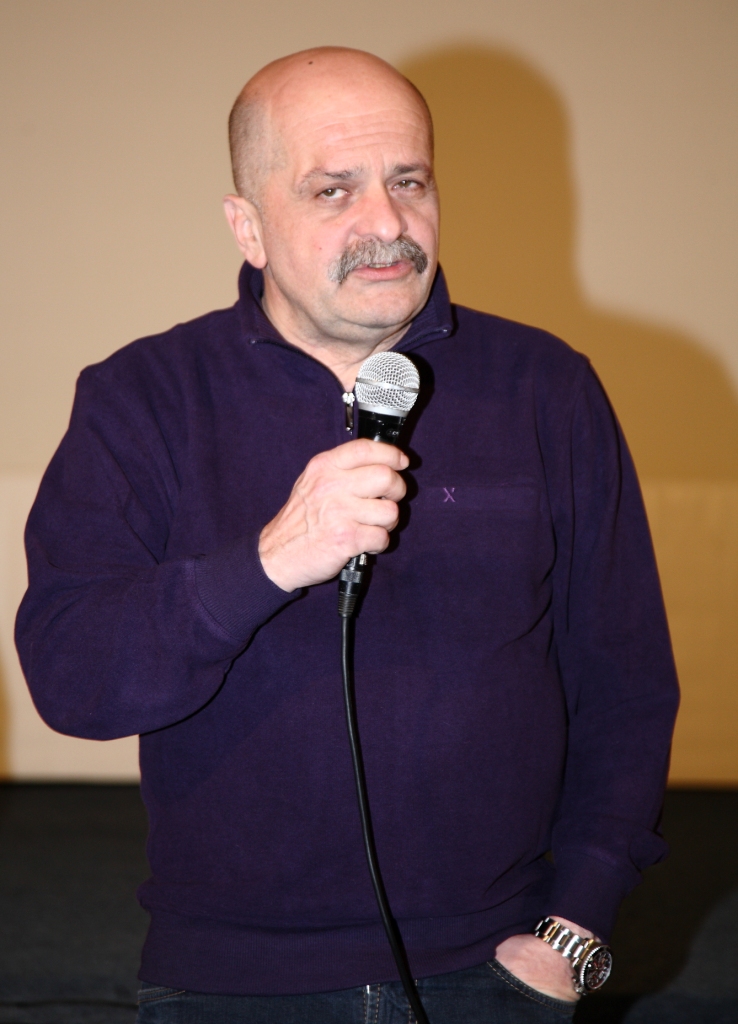 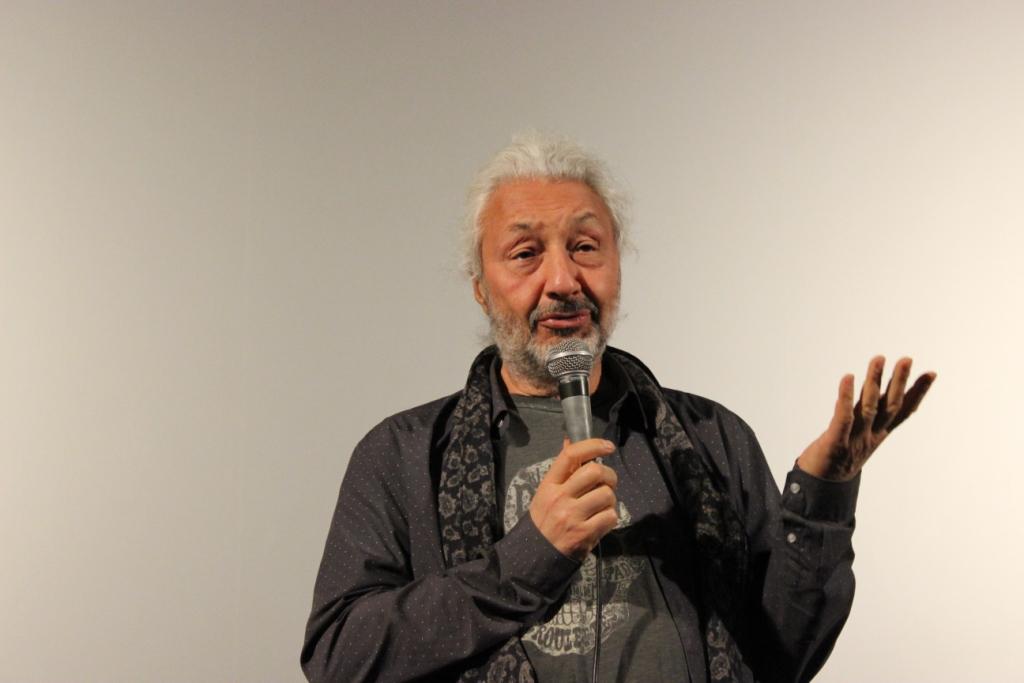 On 16th of March 2019, Saturday, the Russian musician, director and producer Stas Namin, member of the International Jury of the 23-rd SIFF, presented "Free to Rock", directed by Jim Brown. 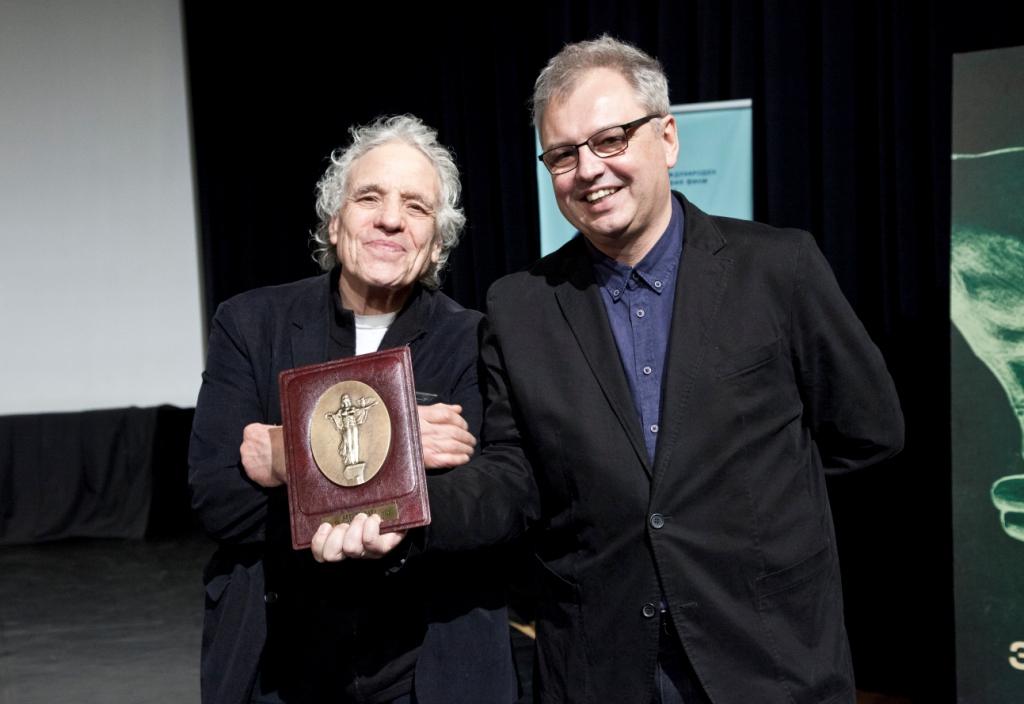 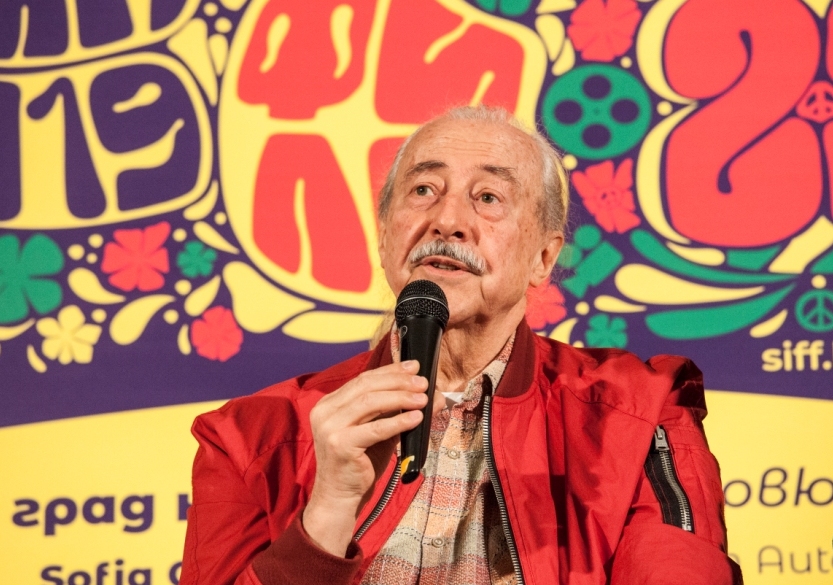 On 16th of March 2019, Saturday, in the Cinema House the legendary Bulgarian rock-musician Kiril Marichkov met with the audiecne and fans in his special "Sofia - City of film: Interview with Autograph". 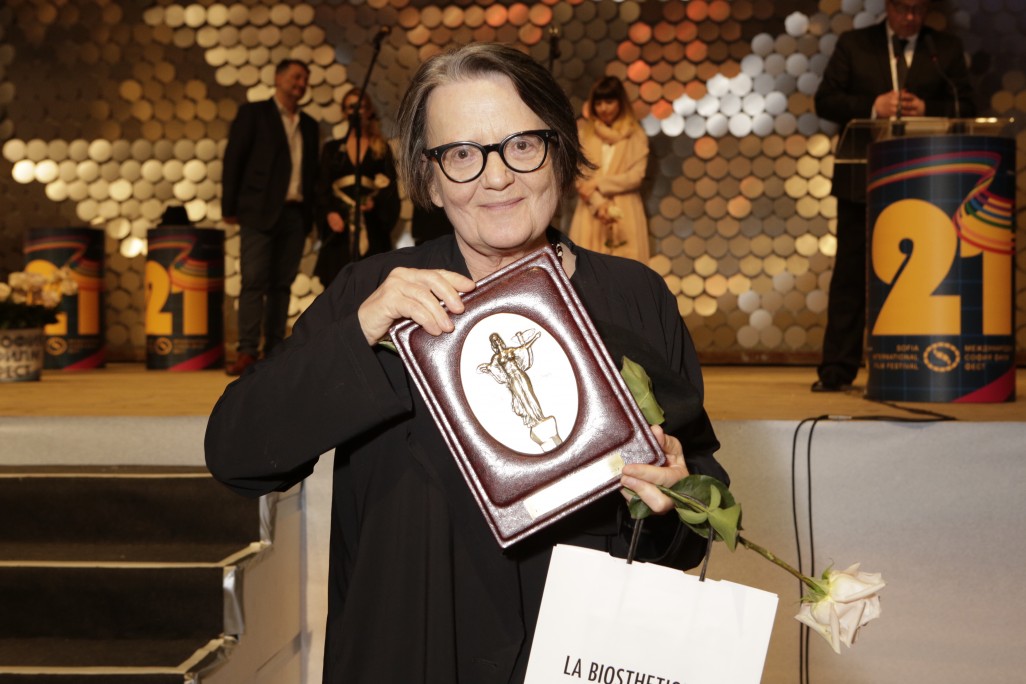 On 18th of March 2017, Saturday, Polish director Agnieszka Holland received Sofia Award, and on 16th of March 2019, again on Saturday and at Hall 1 of NPC, she presented her feature "Mister Jones".

One of the most special guests of SIFF on Day 10, Saturday, 19 March 2016, was director and 1/6th of the Monty Python - Terry Gilliam. We present to you part one of his "Sofia  - City of Film: Interview with Autograph", given at Cinema House that same day.

This is the story of The Festival Band of SIFF, told by Stefan Kitanov – Kita and Stefan Laudyn.

Kita and Pesheto in May 1992, days before Stefan Kitanov became the Director of Cinema House. On the drums is the Danish clown Luna.

The beginning of the Rock Film Festival 1994 with a concert at the Summer Theater, organized by “Tangra” Radio Station and a screening at Cinema House. Before the film Kita and Pesheto performed "Mrs. Robinson".

MUSICAL GREETING FROM THE FESTIVAL BAND AND SIFF

Here are 3 songs from the concert of The Festival Band on the occasion of the 25th anniversary of the Warsaw International Film Festival that took place on the 16th of October at the Palladium Hall in Warsaw. Musical director of the show was the famous Polish rock musician Tomek Lipiński, founder of one of the first Polish punk-rock bands - "Tilt" and co-founder of "Brygada Kryzys". The video material was directed and edited by Grzegorz Lipiec - Lipa. Produced by the Warsaw Film Foundation.